A totally different approach to safety - with Safety Delta

The first impression and experiences

A couple of days ago you have been on board one of your vessels and met with the crew about the report. What is your impression so far?

Our experiences with Safety Delta so far are very good, especially after the vessels received the first report.

What were your expectations towards working with Safety Delta before you went on board?

Because they had received the report only two days prior to my visit I did not expect too much regarding having a qualified discussion since it is all very new to them and they had not had time to discuss it on board. I had to explain a few things to them about this first report and they had some questions. We held a meeting with the entire crew on the bridge going through all the points in the report. The scores were varied, both good and bad. Especially the ratings had found the questions in the survey rather difficult and I can see their point. But I am sure that after a few more survey cycles they will become much more comfortable with the questions and the rating scales. (see note below)

What is your impression – are people confident and do they respond honestly to the survey?

Yes, I am certain they did. I can see it in some of the reports. On this vessel it is evident because the scores are very varied, and because of what they told me when the crew was gathered on the bridge. Several ratings openly said things you would not expect to hear from them, and that was great, because we are not so used to that. In fact, I did spend quite some time together with the captain talking about the importance of the crew being honest. We cannot use the data if the replies are not honest, so that has been stressed well in advance before the survey started. And we have succeeded – I can see that.

The crew is a mix of cultures with a Croatian Captain and Chief Officer, Filipino Chief Engineer and 2nd Engineer, also Filipino Junior Officers on the bridge and Indian Junior Officers in the engine. All ratings are Filipinos. This might give rise to a few cultural issues, since the Croatian and Philippine cultures are as different as can almost be. This was very openly discussed, since it was also reflected in some of the responses. Some crew members felt the tone was too commanding when instructions were given on the deck. On the other hand, the Captain admitted that he could be very straight-forward in his way of speaking. But he was very open to discuss these cultural differences and challenges during our meeting. It is fantastic to keep an open dialogue about this and Safety Delta has lubricated it.

So, you created a dialogue where everyone was open and with focus on how to improve cooperation?

Yes, indeed, and because they had been honest other issues were also brought forward. For example: This is a new vessel and some of the safety equipment had not been available on board from the beginning. Obviously, this is a very unsatisfactory condition which was clearly reflected in the low score in the report. An issue which rightfully falls back on me and the Ship Management.

Easy to point out focus areas

The issues which you and the vessel crew were focusing on, were they the same? – did they have time enough on board to consider what to discuss?

Only the Captain had had a chance to look at the report before our meeting on this vessel, as they had not had time for a meeting among themselves first. But this report made it rather easy to point out focus areas. One of them was that the shipboard management should give clearer instructions when delegating a task. This is not a problem for the Captain as he is pretty clear and outspoken, but the 2nd Officer is young and the cultural mix in the engine could also cause some communication differences.

Another issue that has been highlighted in all the reports in general is about Risk Assessment. This is a task we need to take seriously in TORM. Generally, it seems that risk assessments are made to be in compliance, and we would like to change that. We want people to see the use of assessing risks properly before the job. We have hunch that it is done after the job occasionally. In the office we will discuss different scenarios, for example, it could be an idea to share a good risk assessment within the fleet and adjust it to the present situation. The objective is to find the optimum way to do it.

On another vessels we also had a discussion about the difference between risk assessment and toolbox talk. So, we talked about the toolbox talk which is an informal talk taking place before the job – as most of them already do. The debriefing after the job is, however, not done very often. After our discussion yesterday with one of my vessels they decided to make debriefing a focus point to work on.

Is that also due to Safety Delta that they have become aware of debriefing as an issue to work on?

Yes, and because they had the report and discussed its conclusions they had come to realize that here was something to work on. The ship I visited will have a meeting among the crew without my participation and discuss in teams where to improve. They were all very positive towards this approach which is different from all other safety programmes – and I think all seafarers have tried at least five of them each! Also, for my part, I must say that this is different, and people buy in – they really do!

This is a different approach, they have to communicate more, and the answers are not given on beforehand – a great difference to just following procedures. Are they really able to take this approach on board and are the leaders also engaged?

Everyone is on board with this. Of course, we have spent time in our team in Copenhagen, and also in our Indian teams, to communicate that we are in this together for our mutual benefit. Before the reports came it was rather blurred what it was, but with the report everyone can see the meaning and it gave us a tangible tool to guide our work. For me it has been like day and night in the way I talk with the vessels.

You go on board from time to time and you are also working from the office – how does it benefit your work and role towards the vessels to have the Safety Delta report?

The fact that I have something tangible is important. To me it is not so important whether the report is correct or not, but it gives us focus – a picture of where we do well or poorly. We can decide on two or three areas we want to work with. Very often, the crews are told from the office “do it this way”. Now, the crew are the ones taking the lead and my role lies in the follow-up instead. That is the great difference – we are empowering the crew now. Both ratings and other crew members, irrespective of culture, get a chance to speak up. We actually push them to do so, even the cadets – everyone, must participate actively. This will be reflected in the performance – not only the safety performance – but in the general everyday life on board – trust and many other things will be strengthened.

Some will claim that they always did this – but in reality, the ratings rarely speak up at meetings. One vessel had very high scores in the report and in my communication to them I stressed that a good report does not mean that there is nothing to work on. In fact, I prefer a poorer report to start with – it gives a better point of departure. We must keep on stressing that it is important with honest replies and that the result is not used to evaluate general performance or for their appraisals. I take it that the survey questions are the same next time and by then they will be much more confident about the concept. Even if it takes a couple of reports to become confident it is ok with me. Learning by doing is the best way to develop this.

The next step is to work with the dialogue sheets and the Safety Delta Learning Library. These features are still new to us, but I can honestly say that people are really dedicated.

After the meetings on board and my talks with the shipboard management they will suggest the next steps. It is the crew on board who must drive this. My only restriction is that I have asked them to start with maximum 3 issues. If there are more, we will take them in the next cycle. On our meetings every two weeks we will constantly follow up on Safety Delta.

Benefiting not only safety

Did you spend considerable time to implement Safety Delta compared to the benefit you get as a vessel manager?

Well, because it is new, and because I got 4-5 reports in one go, it did give me more work. But not too much. When I can see the benefit, it is ok to spend time on it; we all think so. It would have been wise not to roll it out in the entire fleet at once but start with just half of the ships. But we will manage anyway, and we wish to prioritise this. This makes a difference not only for safety – it will make a difference in the overall performance – I believe it will. So, in six months’ time it will relieve my job because we have empowered the crew and they can take responsibility themselves. It may sound like a dream scenario, but I believe it is true.

In our meetings among our teams in Copenhagen and India we have to present good safety stories – they will without a doubt be about Safety Delta. With the reports available informal knowledge sharing is already taking place in the office. Let us keep up steam on this – I believe we can do that.

This makes a difference, not only for safety. It will make a difference in the overall performance
Need help? 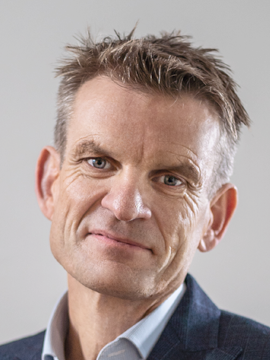